Between August and September 2022, the Intelligent Instruments Lab hosted a new visiting researcher, Marco Donnarumma. Working since the early 2000s, Marco’s aristic practice moves across media art, interactive computer music and contemporary performance. He is an independent artist and researcher, whose work combines performance with body art, movement, sound and technologies such as robotics, machine learning, psychoacoustic techniques. The focus of his work is on the body and the ways it can become a language to speak critically of ritual, power and technology. 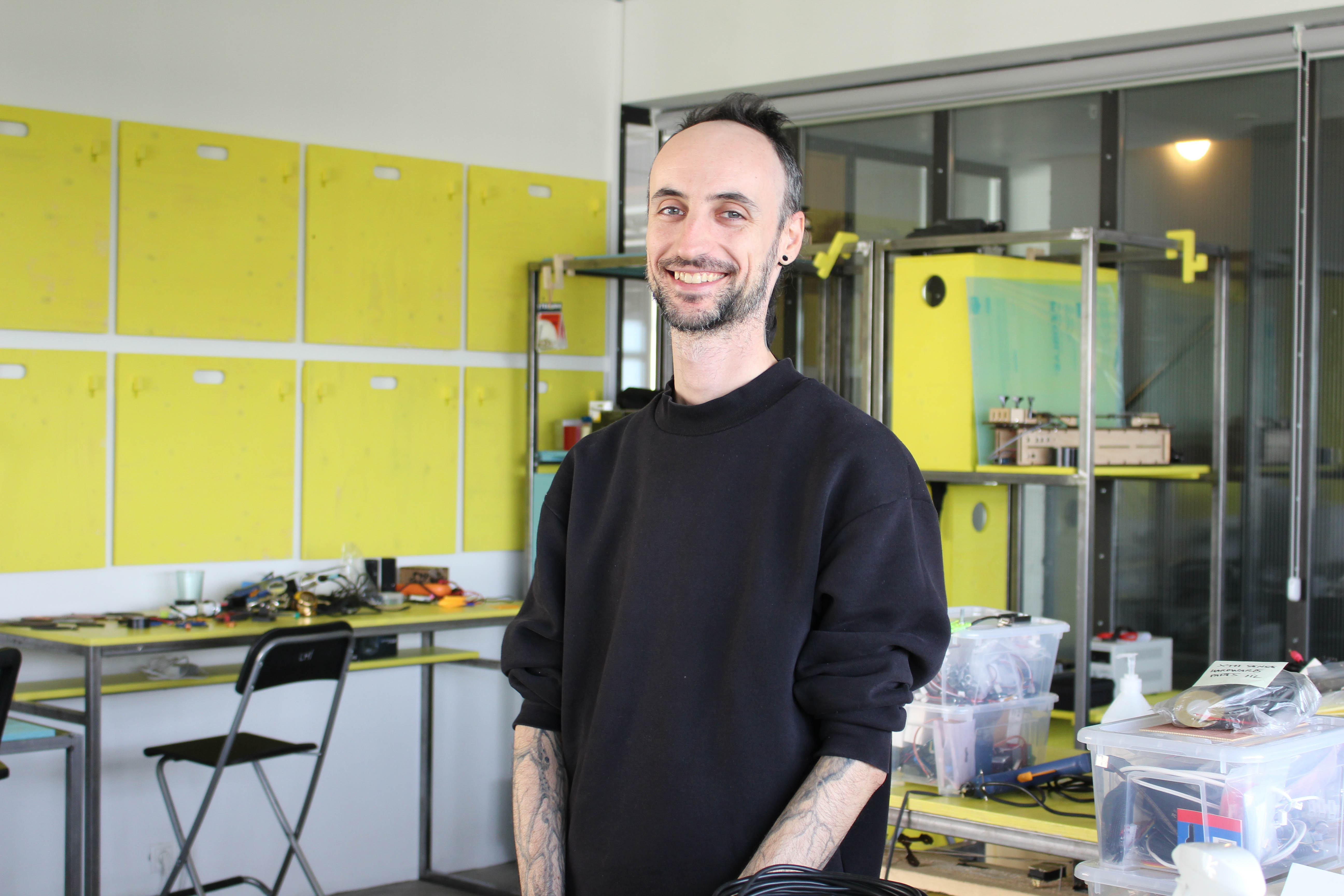 While Marco is known for his work in media art, theater and performance, he is also actively involved in human-computer interaction and unconventional computing. In that context, in 2010 he created the XTH Sense, a free and open biophysical musical instrument. The XTH Sense amplifies sounds from heart, blood and muscles of a performer’s body and uses them to create music, video or light in real-time. 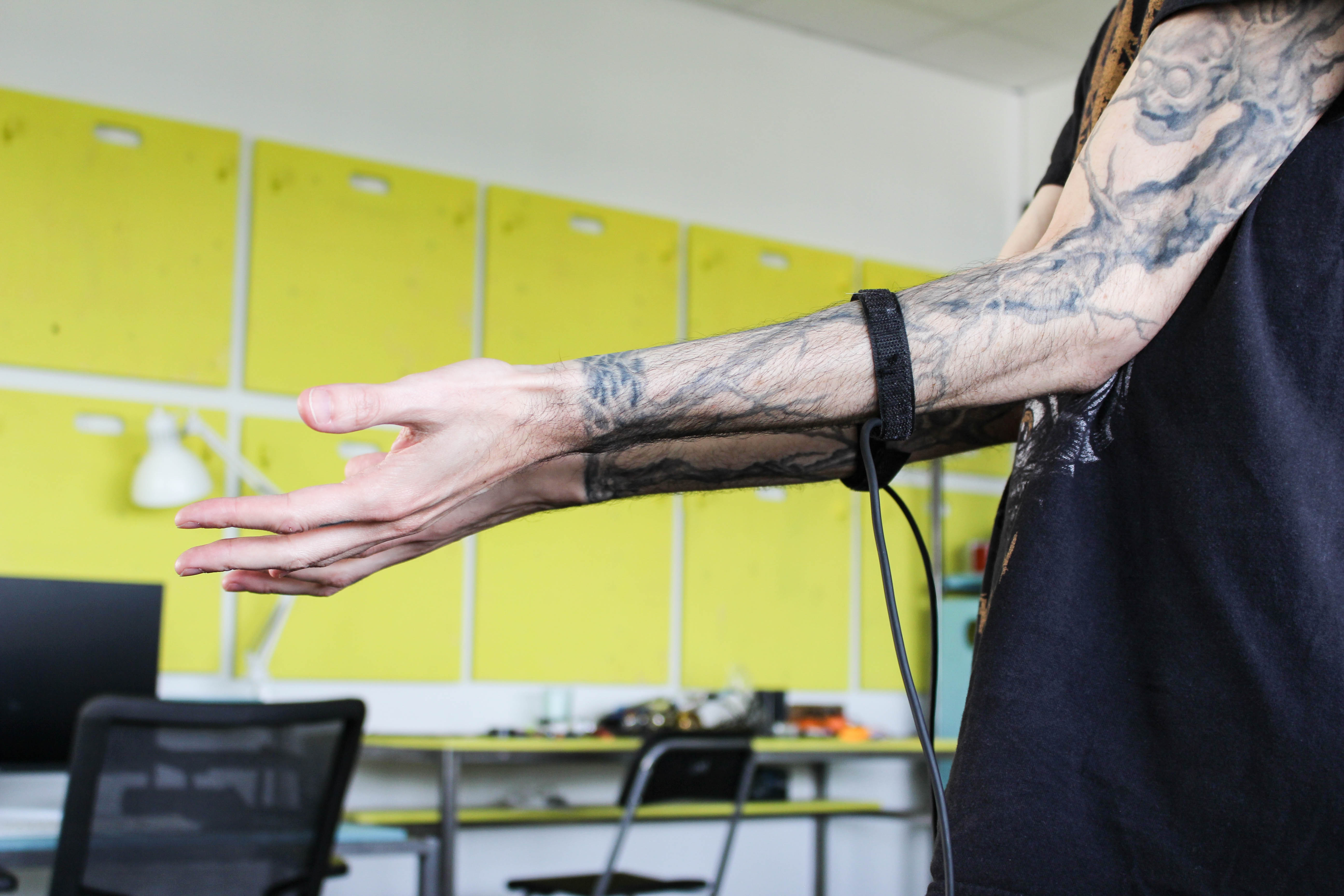 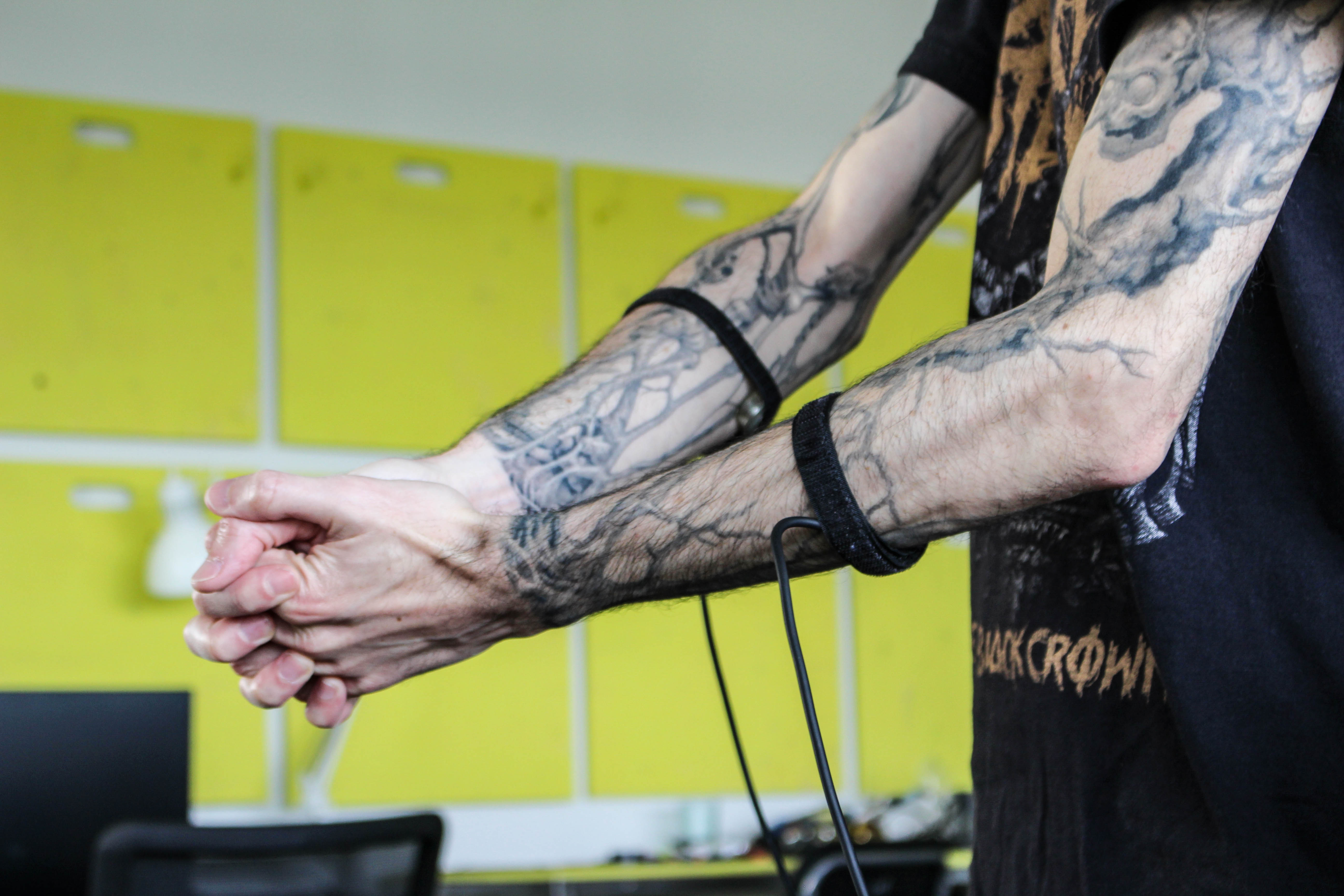 When Marco moves, the XTH Sense picks up sounds caused by the contraction of muscles, amplifies and resamples them in real time according to gesture data

During the residency Marco set out the first steps into a new project that looks at disability, sensory gaps and machine learning. The project originates from Marco’s own experience as a late-deafened person. In his 30s he was diagnosed a sensorineural hearing loss that is making him increasingly deaf, and since then he’s been exploring ways in which to work artistically through this experience. He is now focused on ways to address, in performance and media installations, the richness of alternative sensations that characterise different forms of embodiment such as that of a deaf body. He sees this as an affirmative approach to speak of forms of othering without falling in the trap of focusing on discrimination per se, instead emphasising the knowledge enshrined in different ways of being and having a body. 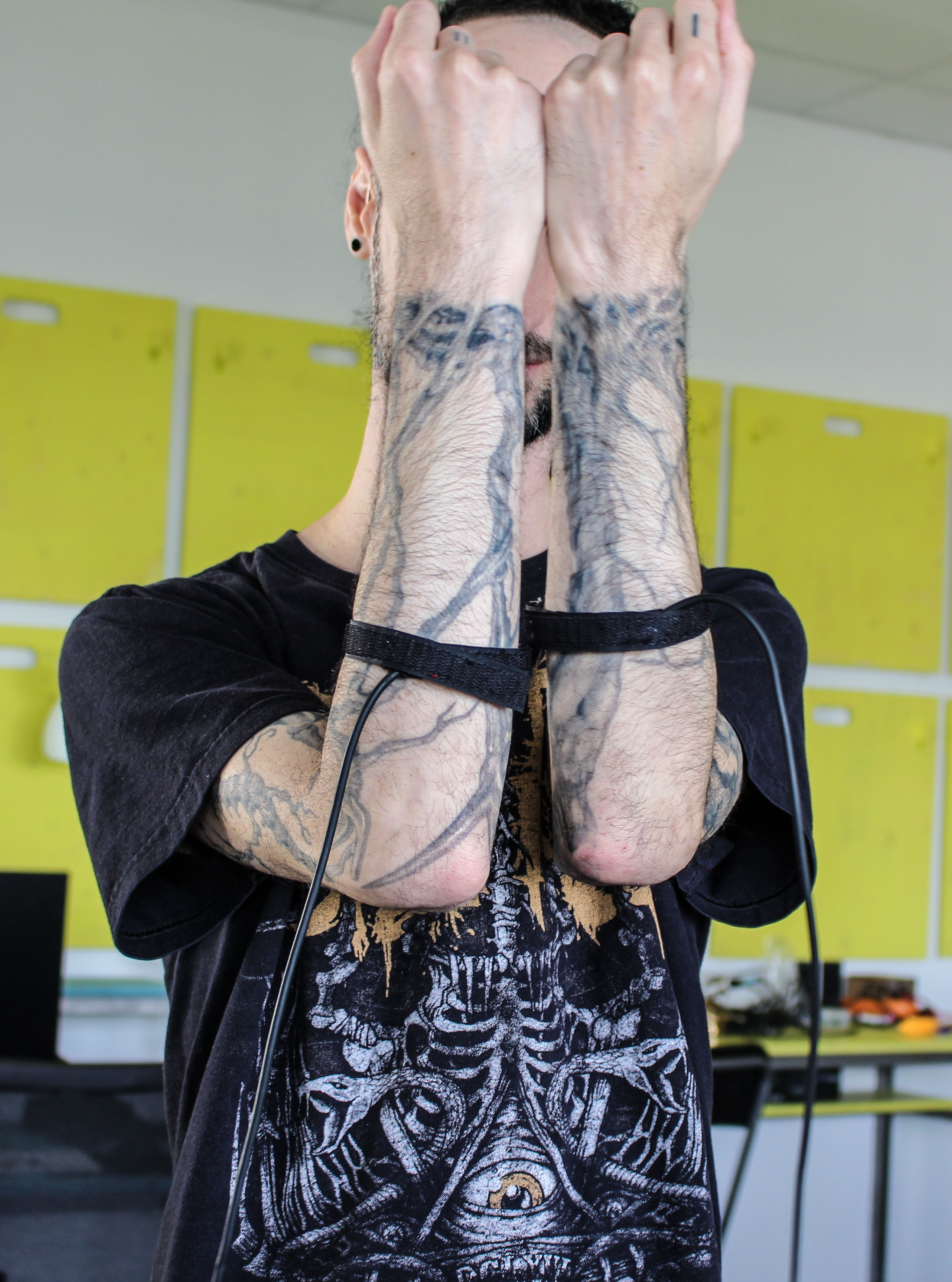 The sensors will detect the tiniest movement in the arms

To this end, Marco and the IIL formed a partnership to investigate and experiment with sound interactions through machine learning and generative systems. The partnership is part of Marco’s new fellowship with PACT Zollverein and Medienwerk.nrw in Germany. During the residency in Reykjavik Marco familiarised with the modular sound technologies being built at the Lab and the research ethos that drive the Lab’s research. Marco will now envision ways in which some of these tools can become part of an prosthetic musical instrument that will be used in a new performance to be premiered in Autumn 2023. At the same time, he will contribute to the Lab research with insight into the use of those tools by people who have different degrees of deafness, starting with himself and involving other people throughout the next months.


When not working on his personal project, Marco creates hybrid live art with the artist group, Fronte Vacuo, that he co-founded in Berlin together with bio artist Margherita Pevere and media artist Andrea Familari. He also loves forests.

Here you can see Marco Donnarumma performing with the XTH Sense at the Intelligent Instrument Lab’s very first birthday concert, on September 1st 2022 in Mengi. An amazing concert we will never forget. We feel honoured having worked with Marco during his residency and happy to have gotten to know him. This is an artist everyone should follow! 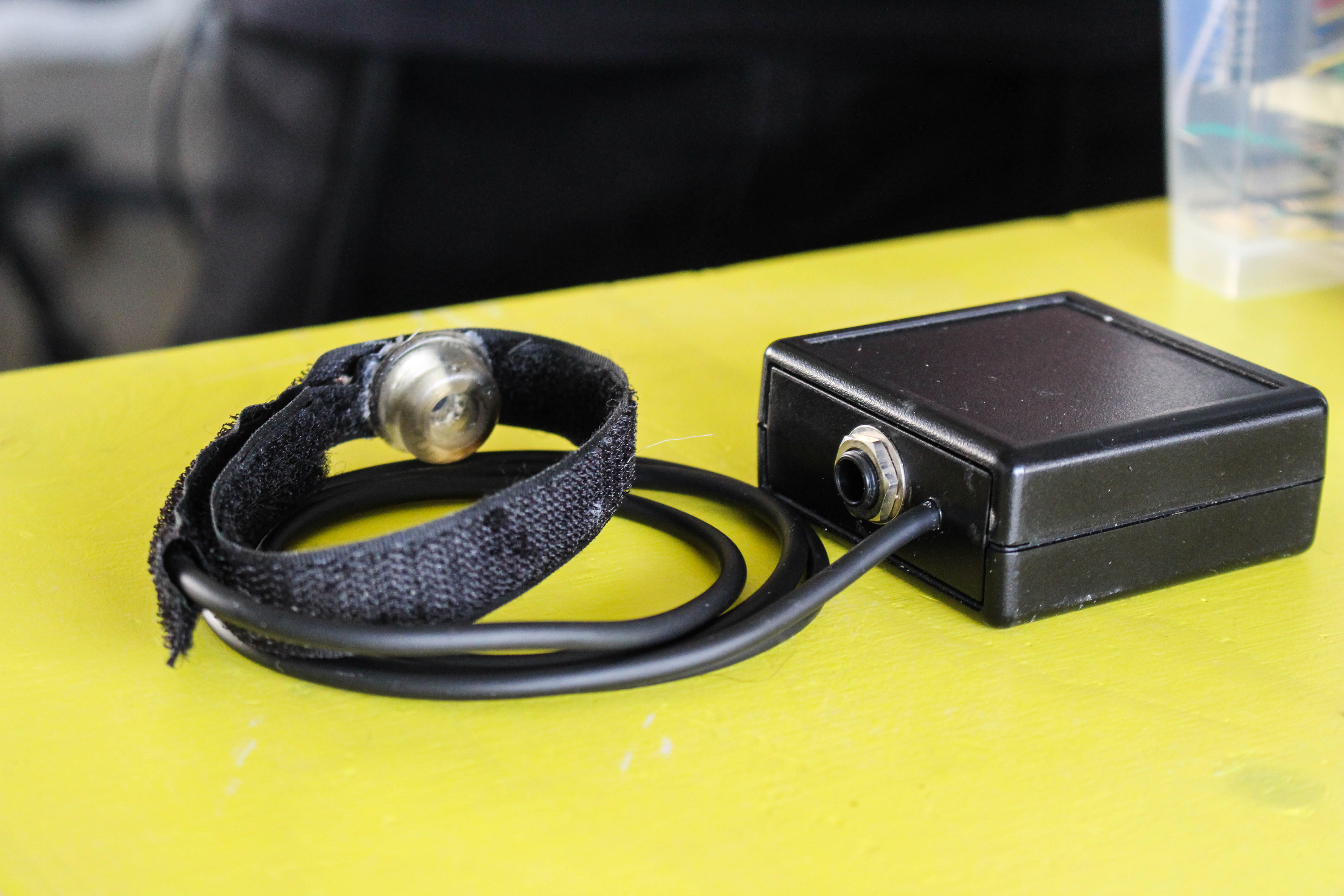 A close up of the XTH Sense, the instrument that Marco uses in the performance